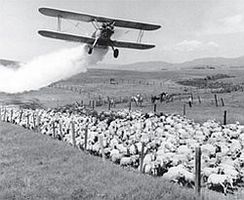 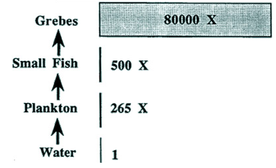 This was the first demonstration of the bio-magnification of pesticides in food chains. Source: MarineBio, 1984 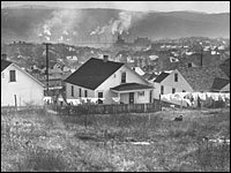 Alfred Eisenstaedt, Time & Life Pictures, Getty Images
"Thirty years ago millions of the great unwieldy animals existed on this continent. Innumerable droves roamed, comparatively undisturbed and unmolested, . . . Many thousands have been ruthlessly and shamefully slain every season for past twenty years or more by white hunters and tourists merely for their robes, and in sheer wanton sport, and their huge carcasses left to fester and rot, and their bleached skeletons to strew the deserts and lonely plains."
- "In the Prime of the Buffalo," J. F. Baltimore, The Overland Monthly and Out West Magazine, November 1889
"The trick is to recognize the early warning signs of resource overuse so as to avoid its full expression in resource decline and public controversy. Recognizing potential areas of resource overuse is technically difficult; acting on those signs to reduce the use if publicly held resources in even harder."
- Dirk Frankenberg, The Nature of the Outer Banks, August 28, 1995
"...'strong evidence that present fire ant control practices entail unacceptable hazards to wildlife resources' and... The Mississippi Wildlife Federation, the Alabama Wildlife Federation, the Georgia Sportsmen's Federation, and Audubon affiliates across the country lobbied the USDA to call a halt to the program."
- Joshua Blu Buhs, The Fire Ant Wars, 2004 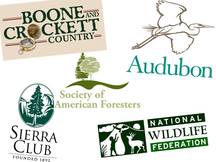 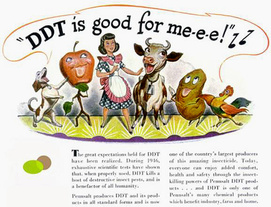 Source: Time Magazine, June 30, 1947
“After having tested different chemical combinations, you [Paul Müller]…made one of the greatest discoveries within the recent history of prophylactic medicine. DDT… kills the mosquito, which spreads malaria; the louse, which spreads typhus; the flea, which spreads the plague; and the sand fly, which spreads tropical diseases.”
- Gustaf Hellström, to Paul Müller at the Nobel Prize ceremonies
"By the end of the 1950s, government spray programs began to provoke public opposition as their impact on animals and wildlife began to be noticed. In Alabama, for example, the legislature withdrew its funding for fire ant spraying in 1959, fearing that the spraying could eliminate up to 75 percent of the state's wildlife."
- Roger E. Meiners and Andrew P. Morriss, DDT: An Issue of Property Rights, Fall 2001
"Gypsy moth populations expanded greatly during the early 1950’s, at which time state and Federal officials conducted a thorough appraisal of the problem... In 1956, the Congress made funds available to initiate an eradication program; 2,230 km2 in three states were sprayed with DDT..."
- Slow the Spread: A National Program to Manage the Gypsy Moth, April 2007
"...National Audubon Society President John H. Baker called the program a 'chemical peril' to humans and to wildlife... Dieldrin, Baker noted with alarm, is 'one of the most deadly of the modern insecticides,' and the... concentration sure to wreak havoc upon southern wildlife. National Wildlife Federation President Ernest Swift... warned that the program would serve only to devastate the ant's natural predators, and that too little was known about dieldrin's toxic chronic effects to use it with confidence..."
- Christopher J. Bosso, Pesticides and Politics, 1987
"...insect-borne diseases, such as malaria and typhoid, which generally claimed far more victims on the battle front than bombs, guns and artillery... the army set out to develop portable aerosol insecticide sprays that troops could use for protection on the front lines..."
- Dianne Dumanoski, The End of the Long Summer, 2009

"Whereas the use in war of asphyxiating, poisonous or other gases, and of all analogous liquids, materials or devices, has been justly condemned by the general opinion of the civilized world; and whereas the prohibition of such use has been declared in Treaties to which the majority of Powers of the world are Parties; and to the end that this prohibition shall be universally accepted as a part of International Law, binding alike the conscience and the practice of nations..."
1925 Geneva Protocol