"I myself am convinced that there has never been a greater ne﻿ed than there is today for the reporter and interpreter of the natural world"
- Rachel Carson, April 1952, Acceptance Speech for the John Burroughs Medal
The success of Carson's first three books launched her into a position of prominence and leadership where she established herself as the voice of nature's woes. She made it her mission to interpret science for the common man and instill in them the wonder she felt for the environment. Her powerful message appealed to a broad audience and the beauty of her prose caught their attention like no conservationist had before.

"...But this notion that "science" is something...apart from everyday life, is one that I...challenge...If there is poetry in my book about the sea, it is...because no one could write truthfully about the sea and leave out the poetry." 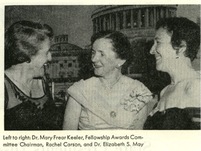 "'Biology['s]...leaders are courageous enough to abandon preconceived ideas and to seek...truth...[Carson] considers it 'my special privilege...to interpret some of these discoveries for those who are not scientists. They have a meaning...for us all.'"

"...I am convinced that we have been far too ready to assume that... [the public] are indifferent to the world... If they are indifferent it is only because they have not been properly introduced to it- and perhaps that is...our fault."

"Those who dwell, as scientists or laymen, among the beauties and mysteries of the earth are never alone or weary of life...Those who contemplate the beauty of the earth find reserves of strength that will endure as long as life lasts."
-Woman's Home Companion, July 1956, "Help your child to wonder" , Rachel Carson
Silent Spring